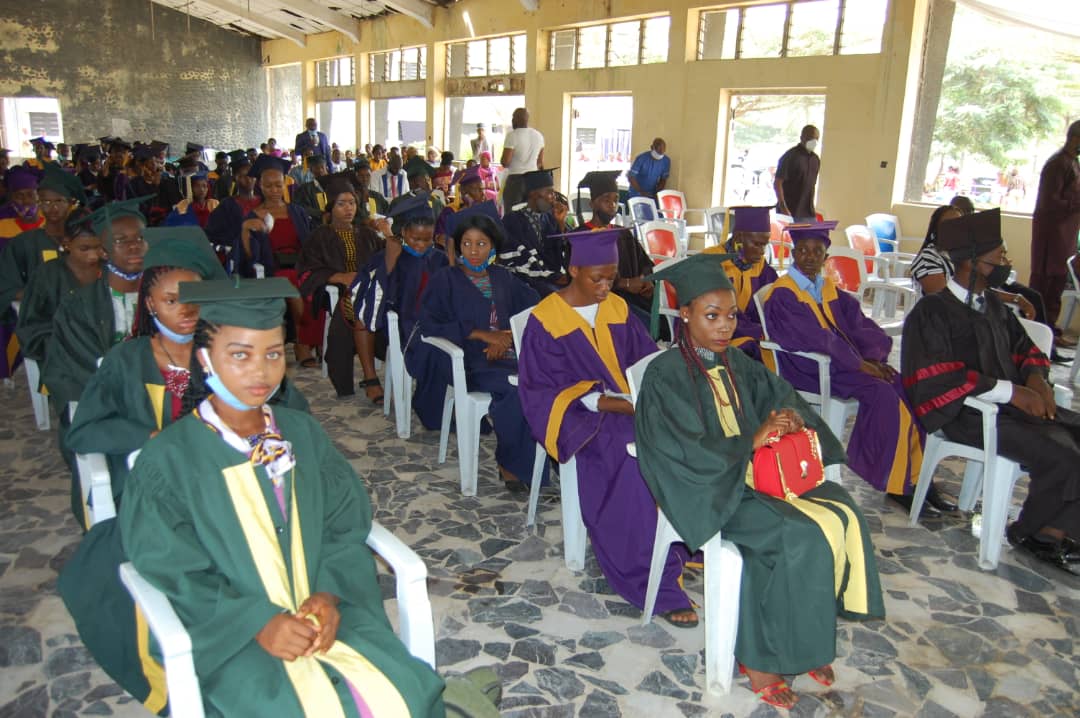 It has become an annual tradition for Government Secondary School (GSS), Afaha Eket Alumni Association to reward academic excellence among students in the graduating class of the foremost secondary school in Akwa Ibom.

The school’s graduation and prizegiving ceremony has become a day to look forward to by students in the exit class as the Alumni Association has made it a tradition to annually splash cash awards of at least N30,000 to the best students in all subjects and other special categories, with a view to promoting hard work, academic excellence and healthy competition among students of the institution.

Due to the COVID-19 pandemic which resulted to long closure of educational institutions nationwide as in other countries, the annual Graduation and Prize-Giving Ceremony, which usually takes place in July, in partnership with the school management, was shifted this year to December, due to the disruption in schools calendar. No thanks to the novel Covid-19.

At this year’s ceremony, the chairman, Akwa Ibom State Secondary Education Board (SSEB), Mrs Ekaette Ebong Okon, congratulated the graduating students for completing six years of secondary education and acknowledged the role God has played in the course of their secondary education.

Represented by Mr Joseph Eton, the SSEB chairman advised that there was nothing wrong if they want to learn a trade, or go into sports, saying, “the world now is how do you survive, how do you eat, not necessarily the certificate but what problem you can solve. It is what service you can render.

Okon said secondary education was just a stepping-stone, explaining that though university education is good, some people venture into other areas after high school because we have come to realise that even with the university education, especially first degrees, people come back and have no jobs.

“So find something doing that will put food on your table. Your self-worth will be measured based on whether you are gainfully employed and can bring something home, instead of being a problem to your parents, the board chairman noted. He admonished the graduating students not to be a burden to their parents, but ensure they engage in something profitable in the years ahead and wished them well.

She commended the school principal in the way he has served government over the years, extolling his quality services, and urged him not to relent in the good works but continue to forge ahead to greater successes.

Also, Okon acknowledged the contributions of the Alumni Association over the years, especially, for repositioning the school, noting that government was appreciative of those who have executed various projects to complement its efforts.

She said the management of the State Secondary Education Board was pleased with what the old students have done to change the fortunes of the school, urging them to keep up the good works.

She wished staff of the school well, charging them to continue to groom the students well so they can write and pass their examinations meritoriously. The president, Government Secondary School, Afaha Eket Alumni Association, Mr Aniekan Willie, observed that year 2020 has been an extraordinary year on many fronts, including the COVID-19 and associated economic challenges.

Willie hinted that it has been five years of the Association’s robust partnership with the alma mater with strong cooperation from the principal and staff, adding, “This year’s event was not originally on our schedule due to recent events. But, when your principal passionately brought forward the proposal and we in turn discussed it with our members, the level of support was almost unanimous.

“The various programmes we have embarked upon since the inception of the Alumni in 2015 – support for academic programmes through awards and recognitions; mentorship and scholarship; infrastructural intervention – a key one being the 16-classroom block aptly named the “Alumni Block has been made possible because of the strong support we have had from the principal, Mr Godwin Ekong. We hope to do more with such strong and continued support.

“We are aiming to build a firm and strong foundation for shared growth – alma mater and Alumni Association. We are your forerunners. We are hoping that in not too distant future when you take over the baton you will do much better than us and consolidate and expand the frontiers. Our key objective is to continue to produce leaders and role models for our community and society.

Willie welcomed everyone and congratulated the graduating class and their proud parents and guardians, as they look forward to an amazing future of achievements, noting, “The world beckons. Go out and conquer it but remember you all have your own path to tread. Congratulations!

Welcoming guests and students to the ceremony at the School’s Assembly Hall on December 19, 2020, the principal general, Mr Godwin Ekong, who is retiring soon after serving the state meritoriously, said he was transferred to Afaha Eket in 2016 and since then he has gained recognition, fame and favour including being the pioneer recipient of the Inoyo Toro Foundation Best Principal Award, nomination by the state for a Presidential Best School Administrator Award in 2018, and nomination by the State Ministry of Education as an Exceptional Principal.

Ekong said, “Many NGOs, groups and foundations followed suit by appreciating us with their awards for our strides in GSS Afaha Eket. I have made good friends within and outside the state because of the exploits of our children in quiz and essay competitions.

During the last four years, he said, the school has witnessed development in key areas as renovation of classroom blocks, building and equipping of two ICT laboratories complete with 20KVA generator and internet facilities, while the school population has grown.

The principal attributed some of the successes the school achieved to the commendable efforts of the school’s ambassador, the Alumni, whose support and encouragement has been the driving force behind the success story, adding that the Alumni’s love and care for the school has left a memorable impression in his heart.

As he winds down his stay at GSS Afaha Eket, Ekong hinted that he would leave with one regret which is his inability to see to it that a perimeter fence is erected round the school to put an end to the controversies surrounding the school boundary.

He appealed to individuals who handled abandoned work in the school to return to site if all the financial part of the contract has been fulfilled, for posterity as the school belonged to our children, grandchildren, great grandchildren and generations yet unborn.

Ekong encouraged the students to be determined to succeed, though there will be challenges ahead, urging them to make the right choices for themselves, adding “I encourage you to put all your energy, your facts, talents and time into each opportunity that comes your way.

he Valedictorian, Miss Favour Solomon Charles, on behalf of the 2019/ 2020 graduating class, said they were admitted into the school six years ago to acquire fundamental academic knowledge and skills, and today they have attained greater heights.

She maintained that Government Secondary School, Afaha Eket had been the backbone of their transformation from ignorant, unproductive, uncultured and inexperienced human beings to erudite scholars of great standard, pointing out that they would miss the academic sessions, the inter house sports competitions, cultural days, exhibitions, daily morning devotions, among other activities.

According to her, the school has experienced accelerated growth which she attributed to good administration and expressed gratitude to the principal general, who made sure the students had adequate facilities for learning, and prayed God’s protection and blessings on him.

She also appreciated the Alumni Association of the institution for their wonderful contributions in the areas of timely execution of projects, the yearly awards and for making the graduation and prize giving ceremony a success.

Solomon implored the state government and indeed all well meaning  Akwa Ibomites to join hands in raising educational standards in the state, in general, and at Government Secondary School, Afaha Eket, in particular. She acknowledged the contributions of their hard working and committed teachers, who did not relent efforts in bringing them up to be disciplined and morally upright, as well as non academic staff and their parents for choosing Government Secondary School, Afaha Eket for them.

Identifying hard work as the bedrock of success, the valedictorian encouraged continuing students to be hardworking, focused and determined to achieve greatness, reminding the graduating class that life outside is very challenging, and urged them to be the game changer as the future depends on them, as such, they cannot afford to fail.

Also, Nobel John Pedro, won N30,000 as prize in a special recognition award for being the only qualifier from Akwa Ibom in the ICPC National Essay Competition and for winning the 3rd position at the national competition, while Victor Raymond Usen, an SS2 student, got N30,000, for representing Akwa Ibom in the National JETS Competition, and won the 3rd position in the individual category. His combination with other members of Akwa Ibom team won the state the overall 1st position in the competition.

The principal general was not left out as he won N100,000, in the special recognition category. All the 32 awards were sponsored by members of the GSS Afaha Eket Alumni Association.

The ceremony, which was graced by parents and old students of the institution, also featured brief exhortation, an orientation/seminar on Future Challenges of Today’s Children, then the Girl Child, by Mrs Edak Willie, goodwill messages, cultural dance, farewell song by the students, and prayers for the graduating students.