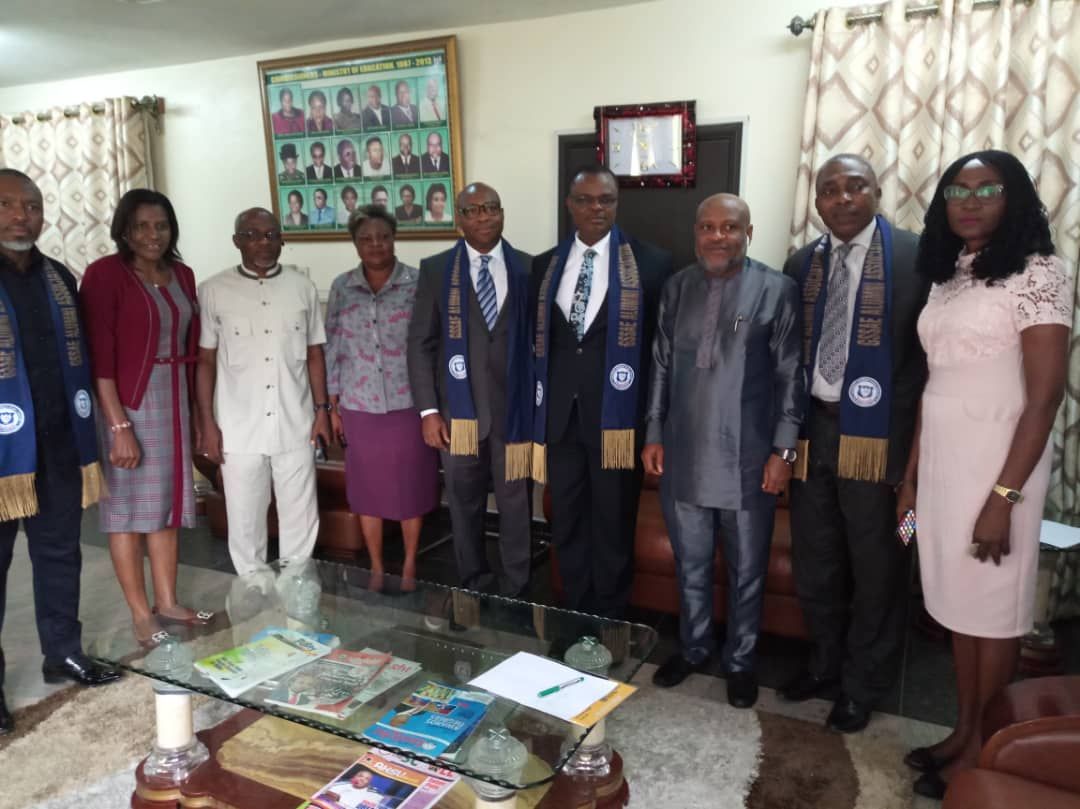 (Published in The Ink Newspaper of August 8, 2019. Ink is an Akwa Ibom-based newspaper)

On Thursday (August 8, 2019), another feather was added to the cap of the current Commissioner for Education in Akwa Ibom State, Professor Nse Essien, as the Alumni Association of Government Secondary School, Afaha Eket, adopted the now two-term Commissioner as patron of the Association.

The unanimous decision was made public when the old students paid a courtesy visit to the Commissioner in his office at the Ministry of Education.

The President of Association, Mr. Aniekan Willie, stressed that the association thought it most fitting to adopt the commissioner as the patron has given his immense contributions and services to GSS, Afaha Eket, and education development, generally in the state.

Willie described the Former Commissioner for Science and Technology as a fatherly figure who, at all times, is ready to sacrifice his last penny and word of advice for the development and growth of the Association not minding if he has any external back up.

He congratulated the commissioner on his reappointment into the State Executive Council and assignment to the Ministry of Education, maintaining the Association is confident that he will bring to a wealth of experience to bear on the development of education in the State.

In his words, “Let me equally convey the deep gratitude of the Alumni Association for your support in attracting to our Alma Mata in your previous administration as Science and Technology Commissioner. We also thank you for honouring our invitation through a representation to the 2019 reunion of our Alumni Association during which we inaugurated the reconstructed 16- Classroom block built by the Association and also presented several awards to deserving students who graduated from the Alma Mata in the 2018/2019 academic session as well as former teaching and non-teaching staff who impacted positively on the students.”

Willie also used the opportunity to congratulate the governor on his reemergence as the State helmsman, commending him for sustaining the free and compulsory education in the State.

Intimating the Commissioner on the track records of the Association, Wille said, “We are happy to inform you that one of our most significant and visible signature projects has been the rehabilitation and reconstruction of an abandoned classroom block which was already facing demolition threat due to its dysfunctional state. Many of our volunteered time, technical skills, and financial resources running into millions of naira to ensure that the project was completed within reasonable time and budget.

“Another impactful programme introduced and jealously by the Alumni Association has been the annual sponsorship and mentorship/reward programme which seeks to encourage academic excellence in our students as well as encourages academic and non-academic staff to remain diligent in the discharge of their function.”

He solicited for the construction of more classroom blocks, urgent intervention through the assignment of more academic and non-academic staff to the school as well as the construction of a perimeter fence to enhance the security of lives and properties in the School.

In his response, the Commissioner thanked the Association for deeming him fit to be their patron.

He pledged his total commitment to the development and growth of the school, assuring that government presence will be felt in the school.

He lauded the old students on their sincere love for their Alma Mata and contributions to the growth and success of the educational institution.

Willie described the For…

It was a unanimous decision that we get him a gift that he would remember and knowing our principal very well, he loved driving while in school and we decided to buy him a car. It sounded like a tall dream at a time but we appealed to members and we were amazed at the number of people that responded and we raised a sizeable amount which was enough for us to buy him a brand new Hyundai car which was presented to him.

That sort of signpost arrival as an alumni association was second to none and by December of the same year, the Chairman of the Association Rt Hon David Lawrence, the pioneer president with myself as secretary and other members making it ten, framed an agenda for the association.

One of the things we did was to intervene in the school through the upgrade of academic teachings by helping the students and teachers do we set up an award and sponsorship programme whereby we give an award for the best graduating student in every subject during their graduation ceremony and also use the programme to provide training and mentorship workshops to the students to help guide them through their academic pursuits.

In addition to that, we are looking to renovate one of the classroom blocks to help reduce cases of crowd in the class. We also made structural interventions and we appealed to our members and fortunately, we were able to raise money and we executed the project though it wasn’t easy.

As at two weeks ago, the building was ready to be handed over to the school which is a 16 room classroom block that will help alleviate the population challenge.

The award and sponsorship programme earlier said has been running for three years and we also did that to recognize one of our old teachers which we felt impacted on our lives while we were growing up and that’s what we’ve done in the past three and a half years.

Two weeks ago a new administration came into being and I happen to head the administration and we said to ourselves that we’ve done much working within ourselves hence the need to draw the attention of government and spirited individuals for partnership with us in areas like provision of manpower, classroom blocks, laboratories, etc. The environment is not that convenient for learning for the current students and with such a challenge I believe they can produce students of sound minds which I happen to be a product.

I was jokingly speaking with Usoro my friend during his days working for Daily Times Newspaper and he revealed that he started working there with his Secondary School qualification and the same can be said about me as a worker with Exxon Mobil at the time. The education we had at that time secured me the starting point before I went on to acquire University education.

QUE: How many years will the new administration run

QUE: In a bid to alleviate the infrastructural challenge in the school, is the association considering acquiring another space within the school to erect new blocks?

ANS: We cannot do everything and you’ll agree with me that it is primarily the duty of the government to provide these classroom blocks and dormitories but we only intervened and we did our own bit.

QUE: Beyond the classroom blocks, has your association considered content development in terms of laboratory equipment and others?

ANS: Yes we do…we have five priority areas that we decided as a group to take on in the next three years and one of the areas we are looking at is to intervene in the area of laboratories and library. We are looking forward to partners joining us while we also chip in our own bit.

QUE: So far what has been the response of the immediate community to these efforts of yours?

ANS:  They’ve been really helpful not financially but they’ve been supportive and tremendous in terms of general goodwill and although we’ve had a few encroachment issues and security we believe the government will intervene.

QUE: What are the other cardinal points of your administration?

ANS: Still on the issue of infrastructure, we cannot do it all alone rather we need the government of the day to assist us. Tomorrow we intend to meet with the Education Commissioner to also tell him this narrative and see how we can partner to address these challenges.

We also intend to expand the sponsorship programmes by also adding scholarship for the best graduating student. We are also looking at improving the welfare of our members and also expand our membership base. We are exploring the possibility of an insurance programme to cover death, illness and disability support etc. We have about 400 members and about 250 on our whatsapp group and we want to expand on it.

Additionally, we also want to launch a website that will enable members wherever they are to key into whatever we are doing and also store historical records of what we’ve achieved over the past period of time and showcase the achievements of our students to inspire others and these are the things we intend to work on in the next three years.

QUE: With so many private schools around, what is the association doing to rekindle the enthusiasm the School enjoyed back then?

ANS: That’s our sincere wish. I don’t think there’s any school around here apart from Methodist Boys High School that can boast of potent and vibrant alumni like us. What we intend to do is to leave behind a legacy so that those that will come after us can build upon. We’ve produced many great people such as Prof Uduak Archibong who is a member of the British Empire, Chief Assam Assam, Eseme Eyibio to mention a few. We want to bring to the consciousness of people that this school still exists and the mentorship programme will help provide a safeguard for students against cultism and you will agree with me that the pressure is much on them compared to our days so we have to ensure they don’t get themselves involved in cult-related activities as it will destroy their future.

QUE: You’ve not talked about sports

ANS: Of course we have been helpful. During the last inter-house sports, our member was the chairman of the occasion and in the coming years, we are planning on introducing a championship as well.

In addition, we have a five-point agenda and one of them is infrastructural development and it is important to underscore that very point. We had 200 students in one class but through our intervention we provided classrooms and it reduced to 145 which is still worrisome.

Despite this predicament, the school still churns out some of the best brains to the society nationally and in the state and you can only imagine how better they would be if they had the right learning facilities.

You can imagine a total of 4538 students having only 42 teaching staff including NPower graduates which you know some of them are half-baked and in the end, it is these students that suffer in the end and this is very worrisome.