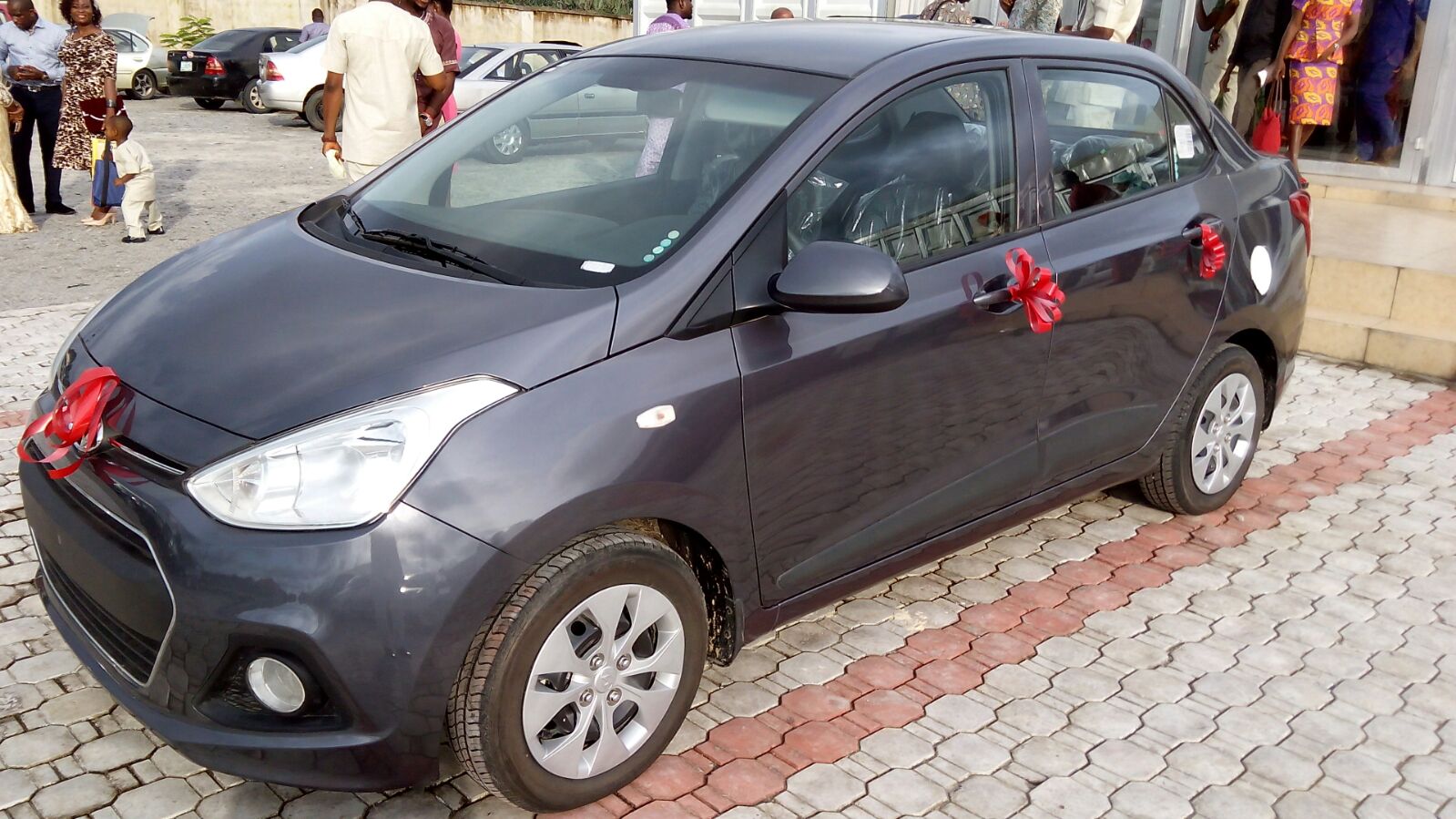 Gone are the days when teachers used to be taunted with the cliché : “ Teachers’ reward are in Heaven,” – when they would have been dead and gone. That was because the government or individuals did not appreciate their contributions to humanity and nation-building.

Times have changed. We are now in the era when teachers reap their rewards here on earth while waiting for the ones in Heaven. Their exceptional sacrifice and dedication to shaping the lives of their students and imparting knowledge to them are being appreciated by their former students and others.

This was the case of a former students of Government Secondary School (GSS), Afaha-Eket, Eket, who surprised their former principal, Elder Edet G. Utuk, beyond his wildest imaginations when they presented him with a brand new Hyundai Accent saloon car. The students appreciated the retired principal for his rare interest in the success of his students and drive to instill right values in them. Pa Utuk received his own reward here on earth.

Utuk, who retired from the public service after 35 years of meritorious service in 1996, had exhibited qualities beyond that of a professional teacher. He knew a greater number of his students by name, was a strict disciplinarian who did not spare the rod to spoil the child. Utuk was one principal whose students respected and feared more than their parents.

He was one who inspired and counselled. He was a source of encouragement, always urging his students on and checking on them to ensure they were able to overcome any areas of challenge. A staunch member of the Scripture Union (SU), Utuk reached out to his students with the word of God, which he professes till date. He was never tired nor failed in his duties. Even teachers respected him and sat up in the discharge of their duties. That tutelage, that discipline and those moral values combined with academics to help his students make their way in life to become successful in their chosen fields and great citizens. Utuk can best be described as a superior teacher.

This formed the background that motivated old students of GSS Afaha-Eket to mobilize and identify with Utuk when they had information that his family was arranging a Thanksgiving Service to mark his 80th year on earth. In less than two months to his birthday, the old students, through WhatsApp, a social media platform they used to plan towards their homecoming scheduled for December 2015, decided that a brand new car was the best gift they could present to the man who impacted their adolescent lives, years back. But the gift was to be a secret that was to be unfolded only at the ceremony since it was to be a surprise.

Although Utuk’s birthday was on September 9, his children postponed the celebration to September 20.   As early as 9:00 am that day, old students of GSS, Afaha-Eket began arriving United Evangelical Church (formerly Qua Iboe Church) Itam 1 in Itu Local Government Area venue of the thanksgiving service, in honour of their former principal. The sermon at the Service was delivered by Utuk’s former student at Afaha-Eket, Rev. Udeme S. Akpan.

After the church formalities, the train moved to E3 Events Centre, KM 1 Uyo Village Rd, Uyo, where a reception party took place. It was a speech-making day when memories of yesteryears were recaptured by some former students and teachers who served under Utuk, bringing back the memories of school days and various encounters one had with the principal.

Chairman on the occasion, Obonganwan Dorah Ebong, Pa Utuk’s former student at Etinan Institute, Etinan, described the former principal as a channel of God’s blessings, pointing out that most of his former students have become good citizens today because he was willing to deny himself the pleasures of this life in order to lead them in the true Christian path.

“We want you to know that we love and respect you. By nurturing us the way you did, you indeed have helped to make the world a better place than you met it”, Ebong stated, praying God to continue to keep him under His divine care.

Acting Dean, College of Health Sciences, University of Uyo, Dr. Enobong Ikpeme, expressed appreciation at the tutelage and guidance she got from Utuk saying it has brought her a long way today. “Those early days in Etinan Institute, Etinan were like building blocks to the height I have attained”, she pointed out and wish him happier, fulfilling and rewarding years. Ikpeme particularly wished to join the family to celebrate his 120 years on earth.

Pastor Udeme Ekpoh, said he knew Utuk as Science teacher in Etinan Institute when his Late S. Ekpoh, was posted to the school as principal.

Ekpoh described Utuk as a man of consistent character, a teacher who had a passion for his job and has honesty as his watchword. “As a child, I was privileged to know lazy and dishonest teachers. I recall when my brothers play football during the holidays, he will be busy in the laboratory doing one experiment or the other.

“Another thing he is noted for with my childhood Google till now is his humility. He will greet you first not minding his status. His humility was exceptional. Once our football went under his Opel Cortina car, he would stop and remove it for us. Is it his driving style, where he will stop for chickens to cross the road. What I can’t say is if he kills mosquito.

“What prompted his hard work, honesty, and humility, is the fear of God, which is his focal point to date”, Ekpoh added.

To Mrs. Atim Ubong, “If you have to pass through the four walls of the school and our dad is your headteacher, then you will be a great person. As one of his students, I am what he trained me to be in life. You are and will always be celebrated”.

Although Utuk’s students from other schools he served attended the celebration, old students of Government Secondary School, Afaha-Eket stole the show. Apart from being neatly dressed in their uniform, their surprise gift of a brand new car to Utuk was so unique that it sent tears of joy flowing down the cheeks of Utuk, his dear wife and that the chairman on the occasion. They were dumbfounded, suggesting that they never expected a gift of that magnitude. But, he deserved it.

Mr. Utuk could not believe what he heard the leader of the students’ body announced. He saw the car keys and knew that the difference was clear.

Chairman, GSS Afaha-Eket Alumni Association’s Steering committee, Mr. David Lawrence Udofa, had called out members of a delegation of old students of the school, among them lawyers, engineers, doctors, senior officers of the military and paramilitary, journalists, engineers, accountants, businessmen, teachers, administrators, among others, to stand by him while he announced the donation.

Udofa said the car gift was their way of saying “Thank You” to Utuk for the good foundation he laid in their lives, saying that was what has helped them succeed in their various fields of endeavour, at home and overseas.

He recalled the passion with which Pa Utuk corrected and disciplined his students in line with the word of God to lay a good foundation for their future.

Udofa, who is the member representing Eket State Constituency in the Akwa Ibom House of Assembly, said “We are proud to say that whatever we are today is a reflection of the foundation laid by the man we are celebrating.

“The alumni came together to undertake some very important programmes and projects in our alma mater and in the course of the planning, we heard about our Daddy’s birthday, so we decided to be part of the celebration.

“We are happy with our Daddy. He spent quality time students at Afaha Eket. We owe him more than any other school he served”, he added.

Responding, Utuk, with tearful eyes and joyful heart, poured out blessings upon them as a good father that he is. He encouraged them once more with Scriptures from Isaiah 41:10, which states, “Fear thou not; for I am with thee: be not dismayed; for I am thy God: I will strengthen thee; yea, I will help thee; yea, I will uphold thee with the right hand of my righteousness” (KJV).

He advised them not to be afraid in life as God will help them to succeed in whatever fields of endeavour. “When you know Jesus, He will help you. Wherever you are, hold on to Jesus, celebrate Him, follow Him and listen to Him and He will be with you”, Utuk urged and prayed God to reward them all and bless them bountifully.

The retired principal who noted that there were many testimonies of God’s faithfulness said he could not recount and expressed joy that most of his former students know Christ, saying there were many testimonies of and recounted some of the instances he helped his students to receive scholarships for professional courses within and outside the country.

Today, Utuk who still drives and reads without using glasses is blessed with Godly children who are professionals in the medical and engineering field, among others.

His first son, Iyanga, an engineer, described his father as a colossus and a living legend who has lived a good life, hinting that his father has shown that it is possible for a man to live a straight and decent Christian life.

He said: “The task of keeping me and my siblings and thousands of your adopted children in the straight path, sometimes hard to understand as a boy and even in the face of stiff resistance, your persistent love and commitment, won mine and many a wandering heart and feet back to the straight and narrow path”.

Adiahaeka said thus of her father, “You’ve been a source of strength, love and guidance to me through all the years. You and mummy have given us a very strong family bond and unity that I can never live to see broken, that is why I just love my husband, children, brothers, sisters, cousins, in-laws, nephews and nieces so much.

Enobong added, “Your strength seems equal to your years Daddy, little wonder you just like driving around town.”

His last son, David said of him, “I remember the six strokes of cane I received I acted naughty, using your garage as my football field and disorganizing what you kept there. As I grow older and I think back, I realize what fatherly love and strong foundation I have received. You nurtured me excellently. You have implanted the best legacies in our hearts. Your next generation will certainly benefit from it all”.

Between 1942 and 1947, Utuk attended St Luke’s Lutheran School, Ibiaku Itam and the Bocler Memorial School, Ibesikpo where he obtained standard six certificate. In 1950, he enrolled in the prestigious Boys High School, Oron and graduated in 1955 when he passed his senior secondary certificate examination with flying colours.

He then proceeded to the Nigerian College of Arts, Science and Technology, Ibadan, Oyo State from 1958 to 1960. Thereafter, he enrolled for undergraduate studies in the Nigerian premier university known then as University College, Ibadan (now University of Ibadan) in 1961 and graduated with the London Bachelor’s Degree in Science (B. Sc) in Botany/Zoology in 1964.

ENCOUNTER WITH A GRAND ALUMNUS